Students: Check this out MasterClass

Graphic design is everywhere. It is impossible to go through a day without seeing countless combinations of words and images on DVD covers, in magazines and books, on billboards, online, and even inside your kitchen cabinets! This yearlong course is designed for students who are interested in expressing themselves visually and digitally.

In this class students will learn about graphic design principles, creative and expressive typography, page layout, and digital image manipulation through the completion of both print and multimedia based assignments. Projects may include, but are not limited to the creation of logos, posters, ads, magazine spreads, information graphics, book covers, animations and websites.

Industry standard software Adobe Creative Suite will be used for all class projects and homework.

With that being said, sitting down in front of a computer and throwing a few words and images on the screen does not make you a designer. Good design does not just happen on its own. All projects will be created through a process that involves research, writing, conceptualization, sketching, and finally, skillful execution of your ideas.

A sketchbook is required
If you fail to bring it with you to class, I will consider you unprepared. I will not allow you to your lockers during class to retrieve your sketchbook.

A USB Flash drive is required for class.
You are required to back up your work at the end of every class.

Your sketchbook is your place to keep notes, brainstorm concepts, collect visual examples, sketch out ideas and reflect upon your work. The documentation of your creative process is as important as your final projects. While I do not expect high AP quality drawings, I do expect you to put a a good deal of effort into your planning and drawings.  Stick figures are not acceptable sketches nor are sketches done after you have created your computer project.  Many research assignments, such as finding examples of design that inspire you, are expected to be completed outside of class. Most other assignments and projects are designed to be completed within the allotted class time if class time is used effectively.

All Final work must be saved as PDF and saved to your folder. Please print your documents and put your name and class number on the back.

What is Graphic Design?

Good design is hard. Its fraught with constraints, conflicting opinions, and the challenges of solving a problem for a broad set of people. Yes, the process requires good taste and skills, but most of all, good design requires the soft skills that bad designers never seem to master (insight, empathy, negotiation, backbone, business savvy).

Bad designers keep throwing solutions against the wall until something sticks (or they get fired). Their solutions are derivative, "inspired" by the latest fad or successful app, rather than being based in well considered solutions

A good designer can defend their  choices/decisions with solid rationale based in the customer (or user's) need or business value.  Bad designers rely on "I went to design school, and look! That's what Apple does"

Everyone starts as a bad designer. The trick is to becoming a less bad (and eventually a good designer) is to hone your skills and craft, but focus on developing your soft skills.

The true mark of a great designer is a great listener, empathetic, humble, and interested in solving hard problems with other smart people, regardless of their background.

What is Graphic Design?
Understanding Typography

Kerning, tracking, warm colors, cool colors, CMYK, RGB, OMG. There are a lot of technical terms thrown around and it can get confusing at the best of times. But, if you’re finding yourself confused, never fear – I'm here to help.
So, whether you’re a new designer yourself, are just a little curious, or are simply trying to decipher your designer’s emails, sit back and relax as we break down some common terms for you.

How to take a screenshot of your work 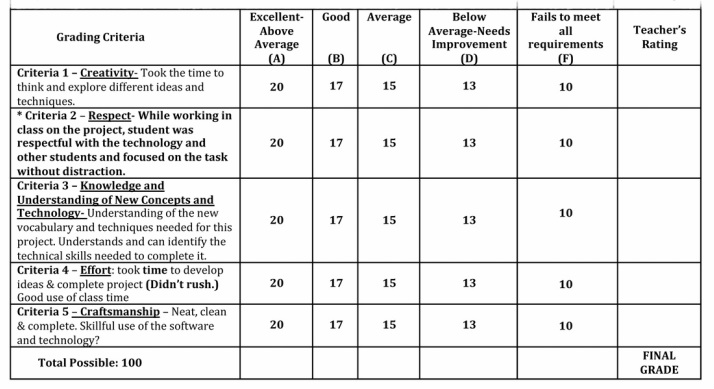 Homework
If homework is not completed for the start of the class, you will be given the opportunity to complete it THAT day. You will need to turn it in to me before school begins the very next day. To turn something in ‘the next day’, means next school day, not next class period.

Assignments
The majority of work is done in class; therefore, there is no excuse for missing assignments. Due dates and deadlines are given far enough in advance, and are extremely fair. All re-worked/re-submitted pieces are due 2 weeks before the end of each semester, at the latest. You will need to complete a re-submittal plan, and get it approved by me before the original project is graded.

You have 1 week to make up any work from an excused absence. This includes projects, assignments, etc. It is the student’s responsibility to check for missed assignments in a timely manner and to turn in missing work. In emergencies and serious illnesses, obviously other accommodations between the student and teacher will be arranged.

If you do not complete or turn in a major project, the following steps will follow:
ACADEMIC DISHONESTY
This class should stretch your artistic abilities and your imagination. These courses expects that you create original and personal work which is not copied from other sources. You are expected to practice artistic integrity at all times!

“Any work that makes use of other artists’ work (including photographs) and/or published images must show substantial and significant development beyond duplication. This may be demonstrated through manipulation of the formal qualities, design, and/or concept of the original work. It is unethical, constitutes plagiarism, and often violates copyright law simply to copy an image (even in another medium) that was made by someone else.”

Artistic Integrity also includes taking responsibility and not allowing someone else to physically do your work for you. Turning in someone else’s work with your name on it is cheating. The school cheating policy will be strictly enforced, and you will need to create an entirely new project within a designated amount of time.
Not quite sure what academic dishonesty or plagiarism in art looks like? Read this article for more information. In addition to the categories listed in the article, having your friend, parent or family member work on your piece of art counts  as well.


Learner Profile
Active Learner: Active learning is contributing to class discussions, group brainstorming sessions and critiques. Time and effort goes into the planning and design of projects, as well as pushing the boundaries and going beyond the minimum requirements.
Integrity: A student demonstrating integrity is focused and on task at all times- no Photobooth, Messenger, games, texting, etc.